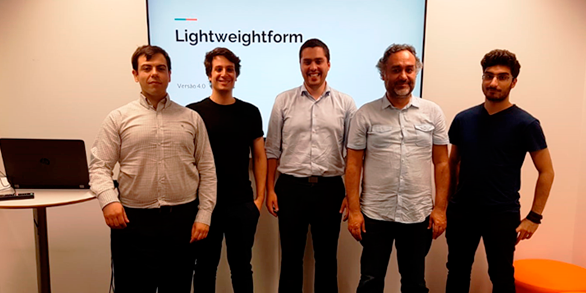 We are thrilled to announce the release of Lightweightform 4.0! Now, let’s go into detail of all the improvements and features!

Bye, bye AngularJS, Lightweight now uses Angular. The adoption of this platform was the core transformation in the 4.0 version. Angular is faster and lighter, thus Lightweigthtform has now a faster performance. However, we are still testing the stability of Lightweigthtform in Angular, so our new release is a beta version.

The programming language used in the web forms changed from Javascript to TypeScript. Since Angular recommends the use of TypeScript, we decided to give it a try and until now all the team is extremely happy with the change.

MobX is a battle-tested library that makes state management simple and scalable by transparently applying functional reactive programming (TFRP). (https://mobx.js.org/). We identified MobX as the best library to solve our problem of reactivity in JavaScript and changed the data model of the web forms to MobX. This change also improved the performance.

And a few changes in the Examples section

Our example “Census of Population of Ireland” is now using Lightweight 4.0. We added a load and save features to the forms so you can test more functionalities available in our framework.
We also redesigned the form’s interface to improve its usability regarding a study about Web forms published usability led by Lusófona University (wait for a blog post about this in the upcoming weeks).